God gave Jeff and Val Sutton vision for GCM . The following narrative by Jeff Sutton details the history of GCM. May God continue to be glorified and His Kingdom impacted by this mission.

“I remember asking Jesus into my life at a VBS program when I was 7 years old, but it wasn’t until I was 18 and a participant on a short term missions trip to Brazil that I truly surrendered my life to Christ. I enrolled in college in the fall of 1978, was married to my wife Val in 1981, and graduated from college in 1983. After working for my father’s business until the fall of 1986, we moved to Eugene, Oregon where I enrolled in graduate school. Within a short time, I landed the job I went to school to get. I was proud of myself but not content. I have to admit this was a very dry time in my life, as I began to value occupational success and materialism more than my relationship with God. Looking back, I can see that true joy was absent from my life. God began to speak to my heart through our Pastor John Koekkoek in the summer of 1989. Through the teaching of the book of Romans, and specifically chapter 12, I realized that I must give my life completely over to God and His purpose for my life if I was to know true joy. I was also greatly impacted by the book No Compromise, the Life Story of Keith Green. This biographical account of the life of Christian singer Keith Green challenged me to live my life more radically set apart for Christ and His kingdom purposes, no matter what it might cost me. It was clear that God was speaking to me and asking for complete submission to His will. My state before God was clear: I must commit myself and my family to a life of service to Him.

From January through June of 1990, we took a sabbatical with several other families through YWAM (Youth With A Mission). This was a time of deep spiritual surgery for me that resulted in renewal and growth in my relationship with God. We felt called to go to Europe in June of 1990, and by November of that same year God had provided $800 in monthly support and we were living in Germany. 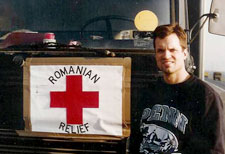 “We quickly got involved transporting aid to Romania, resourcing missionaries with material goods such as clothing, food, and medicine. From January of 1991 through September of 1994 we made 32 trips back and forth from Augsburg, Germany to the cities of Cluj and Iași Romania. We were overwhelmed by the needs of the people who were caught in the midst of the transition from Communism to a new democracy. There were gas lines, bread lines, and restrictions like we had never seen before. God was truly giving us a crash course in cross cultural missions. During this time we had the opportunity to lead many short term missions teams to several orphanages in the region of Transylvania. 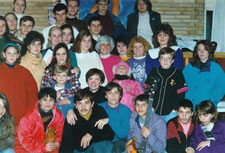 “Between 1993 and 1994, we conducted two evangelistic outreaches to the city of Iași in Northeast Romania with the purpose of reaching out to University students. In 1994 we felt God calling us to move to Iași to work with students who had received Christ during our outreaches. Although I (Jeff) felt a strong desire to return to the states to take some Bible classes, God obviously had other plans for us, redirecting us to Romania. He gave us the vision to start a campus ministry among university students, to train Romanian student leaders to assume the ministry responsibilities, and to purchase a facility for a Christian kindergarten. 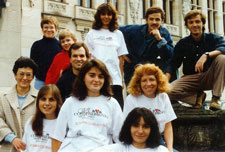 “In 1994, God laid it upon our hearts to develop our own mission as a tool to support the vision we had for Romanian ministry. This decision represented a huge step of faith for us as we were truly stepping into unknown territory! As we became more certain that this was God’s direction, it was time to choose a name. We realized that this would be no small task as it would be a name others would identify with our ministry for years to come. Val and I exchanged idea after idea as if this were our first born child, trying to come up with the definitive name that would describe our mission. It was only after a long and futile brainstorming session that Val asked something like, “What does God desire most from our lives and ministry?” What a great question! After some deep reflection it was clear to us that the answer was summed up best by Jesus in Matthew 22. After all our wonderful ideas our name was handed to us by Jesus himself, a name that has continually caused us to focus on life’s simple yet profound mission, Great Commandments Ministries. Over the years some have commented that the name is to long, they have wondered what it meant, they have called it Great Communion, Great Commission, and Great Commandment (as if there were only one)! But for us this has been more than a name; it has been a mandate to commit to a simple purpose: to Raise up Lovers of Christ With Passion to Serve. So it was that in May of 1994 GCM was born.

“It was a thrill to see the things God brought to fruition in the five years we spent serving in Romania. We began the student ministry in October of 1994 with 13 students. In 1995 a new church, Eclesia, began. The church grew older, deeper and larger and began to multiply. Eclesia has planted new churches in Moldavia with missionaries raised up and sent out from the home church in Iași. Perhaps the most exciting thing God has done is assemble a strong team of Romanian leaders who have eagerly and ably assumed all ministry responsibilities. In May of 1995 God blessed us with a new facility for the Christian Kindergarten, Paideusis, completing the vision God sent us to achieve. We are humbled and excited to have been called to Romania for a very special season of life. 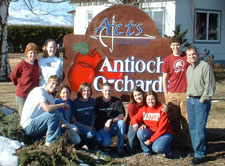 “In December of 2001, God began to stir our hearts with a new vision to bring clarity to the lives of young adults who have a strong desire to be used of God in ministry. We were excited to meet college age adults who were devoted to serving Jesus with their lives, but troubled by their lack of faith or understanding of where God was leading them. We began to experience an increasing vision to provide a place of sabbatical where young adults, who stood at this crossroad of life, could get away and seek God wholeheartedly without distraction. Val and I had experienced first-hand what God could do with a bit of faith and a sincere desire to serve Him. God was stirring our hearts with passion for a place where students could come together in community, grow deep roots in Christ, and seek after His will for their lives rather than their own. 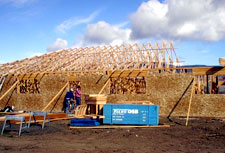 “In April of 2002 we made an offer on a 20 acre apple orchard in tiny Tieton, Washington with a promise from God…but no resources. Our closing date was set for July 19th and after two weeks of prayer and fasting, God miraculously provided the means to buy the property and an additional $150,000 to begin building a dormitory on that exact day! Within one month the county had approved our land zone change application and we began pouring the foundation in October. In March of 2003 we began construction and by January of 2004 we had our first team of eight eager students assembled here at Antioch Orchards. So it was that ACTS (Antioch Christian Training School) was born, and we have been “raising up lovers of Christ with passion to serve” ever since. Today our staff team has expanded and God has raised up teams of young people to serve in Romania, Sierra Leone (West Africa), and central Mexico. We are eager to see where He will lead next! It thrills us to look back at God’s handiwork in the development of GCM and we look ahead with great excitement at the awesome things He intends to do!”